A world of science, sound and art! 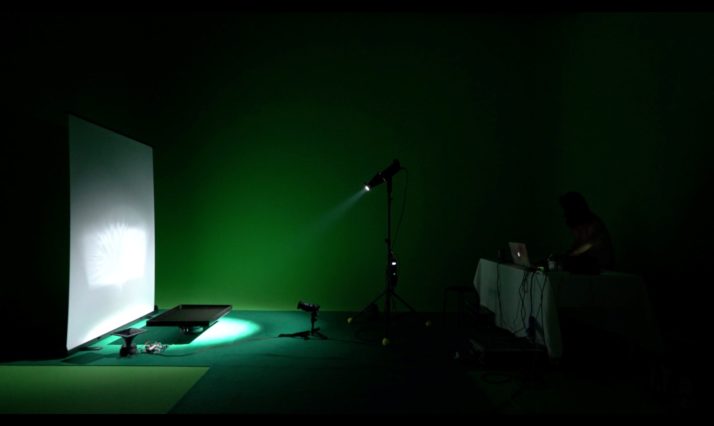 100 years ago, Niels Bohr received the Nobel Prize in Physics for his work on the structure of the atom, and his discovery together with his scientific and philosophical thought contributed to the development of science as we know it today.

Within the framework of the project Quantum Aesthetics several cross-sectoral exhibitions has been created. The exhibitions bring together an international team of 3 sound artists – Jacob Kirkegaard (DK), Tie Yann (CN), and Anna Ķirse (LV) –with the help of physicist Oliver August Dall’Alba Sandberg from the Niels Bohr Institute explored the world of quantum science to find inspiration and create contemporary and artistic reflections on quantum mechanics. In august the three artist had a study trip to the Niels Bohr Institute in Copenhagen where they visited the labs of the institute and could go in depth with the field of quantum mechanics.

Jakob Kirkegaards piece Chaos Edge is a sound piece using two different recordings of butterflies. The first part of the work presents the stable but increasing tremble recorded from the tip of two wings on a butterfly poised for flight. The second, the unpredictable movement of the wings of a tethered butterfly in full flight mode.

Anna Kirses piece Mundus Invisibilis: Cleanroom is an exploration of the great nuances of sound by string instruments in combination with electronic and synthesized sounds. The piece is inspired by a very specific quantum experiment based on the Pauli exclusion principle where a cloud of lithium atoms is supercooled and ultra-squeezed and becomes practically invisible to scientists.

Tie Yanns piece Quantum Drops is re-creating the connections between sound frequencies, water and light in order to take the listener into deep space and find poetics that it is not possible to hear in the buzz of daily life. As the only way to grasp the ideas behind quantum science is by experiencing and observing their effects, Quantum Drops is recreating the so-called double slit experiment and discovering the connection between quantum science and Taoism.

The three artworks taking part in the exhibition are all inspired by quantum physics and the thoughts and ideas by Niels Bohr. Besides being one of the most important scientific figures in Modern times, Bohr was also a founding father of the Danish Cultural Institute and interested in philosophy, culture and art as well as the sciences. In this way, Complementary Contradictions also breaks down the boundaries between science and art in new and thought-provoking ways.

The artworks, by a Danish, a Latvian and a Chinese artist respectively, are both inspiring and enlightening as you, the listener, gets invited into the world of quantum science which may give you different views on how you yourself are situated in the world. We really hope to see you there!