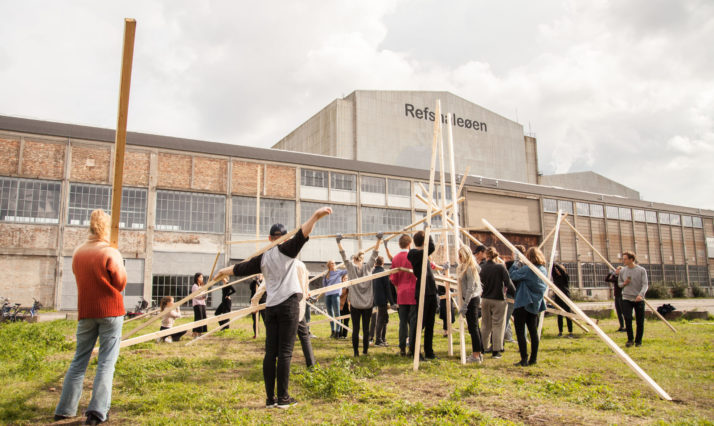 The Interreg Baltic Sea Region Project UrbCulturalPlanning carried out its second Urban Lab in Copenhagen on the 9th-11th of September. The Urban Lab was organised to bring together urbanists, city planners, artists, researchers and academics, students, community organizers, politicians and activists to explore key aspects of the visioning part of urban planning. More than 40 participants from Baltic Sea Region countries participated with the aim of formulating a common vision, sharing ideas and updates from their projects in order to inspire each-other in making more creative, liveable and self-sustaining places in their cities.

The specific Urban Lab focused on preparing and examining the local projects partners to work with the cultural planning methods. Københavns Internationale Teater/Metropolis was the host of the Urban Lab on the topic Visioning.

What is the vision?

The vision is to transform the challenged city areas into places of anchorage, possibility, connection, networking, self-realization and inspiration.

How to achieve it?

By using techniques of urban cultural planning, which include cultural mapping, debate and dialogue, visioning, co-creation and by taking strategic decisions which should ensure the project’s implementation.

Who should be involved?

Overview of the days:

The first day Trevor Davies from Metropolis started out leading a session on the process of cultural planning and places-based transformation to recap on principles and processes followed by a discussion about the concept of Visioning. His main aim was to encourage the participants of the Lab to point out three ideas, pick three values and select three emotions for their own project’s vision. This should all drive the visions and activities to be realized in the future. The visions were presented and discussed in groups to foster innovation and inspire other participants to experiment and try out these ideas in real-life settings. The countries from the Baltic Sea Region have different societal challenges to tackle, which is area specific, however the common focus for all of them was to emphasise the role of citizen participation and co-creation in the process of urban planning.

Sociologist Majken Mac is specialised in participatory processes. She commented on community visioning from her present position with the recently formed political party, Alternativet, which seeks to formulate an alternative vision for society using “political laboratories”.

The second day started with a talk led by David Pinder, professor at Roskilde University, about the role utopias play in urban planning processes. The message is that utopia can be used as an agent of change instead of being conventionally understood as an ideal state or society found in another space or time. To turn this utopia into reality a collective effort of artists, architects and urbanists is needed to create better city solutions.

Furthermore, Annika Agger, Professor from Roskilde University, started a discussion about how to activate the local community to co-create the alternative urban strategies.

Later at the day the participants visited three sites where artists and cultural interventions have defined urban change in the city. The city walk was guide by Mette Prag.

Day 3 took place at the premises of Danish Cultural Institute in Copenhagen. The participants got inspiring insights from Rikke Lequick Larsen, Head of Dpt. Of Copenhagen City Council, on how decision makers implement regeneration and renewal of neglected city areas. The intention is to create a city in balance and in order to implement this, it is necessary to engage communities, create common visions and make sure to maintain a balance between political, businesses, associations and citizens’ agenda to improve life quality in the cities.

Afterwards, Trevor Davis talked about how artists can lead processes and give the possibility to imagine potential and alternative futures. He inspired the participants by showcasing the examples of previous performances and art in the urban public spaces in Copenhagen.

The moderators provided participants with practical tips and tools for cultural planning to foster dialogue, debate and examine which strategic decisions should be made and implemented.