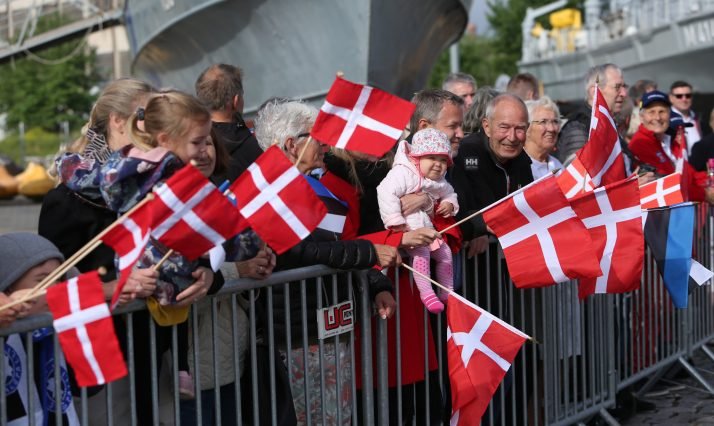 On the 15th of June, 2019 we celebrated the 800th anniversary of Danish flag, 135th anniversary of Estonian flag and Estonia 100. Danish Cultural Institute, Danish Ministry of Foreign Affairs, Danish Embassy in Estonia and the Danish Ministry of Culture together with other partners from Denmark and Estonia organized various events marking the close historical, political and cultural ties between Denmark and Estonia.

The wide programme consisted of many inspiring events including exhibitions, family day, themed tents, Gala concert and inauguration of Queens Garden. We were particularly honoured to have the presence of Her Majesty the Queen of Denmark Margrethe II on these days.

The legend of Dannebrog

According to the legend, on 15 June 1219 the Danish flag Dannebrog fell down from the sky in Tallinn.

During the Crusades in Estonia Danish king Valdemar II was close to losing the Lyndanise battle near present day Tallinn, but suddenly a flag fell down from the sky. The luck of Valdemar II immediately changed, and he won the battle.

Up to 1854 the Dannebrog was solely the flag of the Danish King and the Royal Navy. Slowly it also became the Danish symbol of the army and the mercantile marine. Since 1854, private persons have been allowed to use the flag.

The word “Dannebrog” means “the cloth of the Danes”. The name of Tallinn is believed to derive from “Taani linn” (in Estonian “Danish Town”).

The official visit started at the Seaplane harbour where HM the Queen Margrethe II was received by the Estonian president Kersti Kaljulaid. Later Queen Margrethe II opened the Danish Golden Age exhibition “Dannebrog: The Flag that Fell from the Sky” together with president Kaljulaid as well as the cultural and historical exhibition at Kiek in de Kök and inaugurated the Danish Queen`s garden.

The Queen was also present at the Tallinn Freedom Square on the “Family day” and the beautiful concert by Danish baroque orchestra Concerto Copenhagen and Eesti Filharmoonia Kammerkoor / Estonian Philharmonic Chamber Choir at Estonia Concert Hall. The extensive programme on 15th of June ended with the Gala dinner hosted in the Queen’s honour by the Estonian president.

The visit concluded the next day with a celebratory church service at Tallinn Cathedral.

In one of her speeches HM Queen Margrethe II emphasized that the memory of the fierce battle in 1219 has been kept alive in both countries, but the animosity is long forgotten. Denmark and Estonia have been closely connected for centuries, highlighting that both countries are now partners and allies.  She also mentioned the important role of Danish Cultural Institute in maintaining and developing Danish-Estonian cultural ties.

Her Majesty The Queen’s full speech at Gala Concert can be found here.

Her Majesty Queen Margrethe II and Prince Henrik were first on a state visit to Estonia back in 1992, a year after restoration of Estonia’s independence.

There is a rich variety of exhibitions dedicated to the Dannebrog 800/ Estonia 100 celebration.

The exhibition divides the events related to the birth of Tallinn into three phases: before the city, the arrival of King Valdemar, and establishing the city, showcasing Tallinn during Danish era based on archeological findings.

Dannebrog – The Flag That Fell from the Sky: The Golden Age of Danish Art

Lorentzen’s picture of Dannebrog falling from the sky as the centrepiece and many other works by Danish Golden Age Masters.

“In Denmark at the turn of the 20th century, art from the first half of the 19th century started to be called Golden Age Art, because, despite the unrest caused in the country by military defeats, slave uprisings, devastating economic decline, and loss of territories, a powerful process of national self-determination occurred, in which art played an extremely important role. The goal of the exhibition is to provide a critical and selective survey of the developments that occurred at a time when art and politics blended together as the road to nationalism was being established. The role of art as the influencer and reflector of the people’s consciousness makes these themes not only interesting and educational for the modern viewer, but also topical and thought-provoking.”

Overview of the background and events of the Battle of Lyndanisse on 15 June 1219, the Danish periods of rule in Estonia, as well as the Danish monarchy at that time.

Overviewing both the story of the beginnings of the Danish flag in 1219 and the influence of the royal coat of arms of Denmark on the evolution of the national coat of arms of Estonia. The historical exhibition showcases an in-depth review of the historic relations between Estonia and Denmark, the volunteers provided by Danes in the Estonian War of Independence and the trade relations over the centuries.

Near the Danish King’s Garden in Old Town which is seen as the place where Dannebrog fell down in 1219, a new Queen`s rose garden stands as a lasting symbol of the celebration of Dannebrog 800 and Estonia 100 and the friendship of the two nations.

The Queen`s garden was officially inaugurated by Her Majesty Queen Margrethe II together with Mayor of Tallinn. In the garden you can see 800 roses, one for each year since 1219, and 8 Copenhagen benches, one for each century, as a gift from Denmark to Tallinn, its citizens and its many visitors.

On the Tallinn Freedom Square (Vabaduse väljak) there was an open-air celebration of the Danish and Estonian Flags, marking 800th and 135th anniversaries respectively. Guests could enjoy choral singing, orchestra, Danish jazz and Estonian folk music, participate in an educational flag-game and win an all-inclusive family ticket for a weekend in Copenhagen with a visit to Tivoli as well as enjoy Estonian and Danish cuisine at the Food Street.

Moveover, the square was filled with Danish and Estonian themed tents – organisations introduced themselves to the locals and festival guests, emphasizing the cooperation between Denmark and Estonia. Also both Governments were represented in the tents.

Danish Cultural Institute also had their own themed tent – fun and interactive ‘’Dannebrog 800 film studio’’ where kids could make their own movies focusing on the joint history of Denmark and Estonia. Equipped with the newest technology, green-screen, props and devoted team, were introduced children to the “behind the scenes” of film making. With the help of Baltic Film, Media, Arts and Communication School in Tallinn, our consultant Marta Bite from Riga and the 3 wonderful volunteers, around 40 short movies were made that day.

Here you can see a short recap of some of the films made on June 15!

The festive Gala Concert “Estonia 100 and Dannebrog 800” by Danish National Baroque Orchestra Concerto Copenhagen and Grammy Award-winning Estonian Philharmonic Chamber Choir was one of the splendid markings of the 800 years of Dannebrog.

The concert program was designed to emphasize the Danish-Estonian cooperation and historical relationship. The two internationally renowned musical units joined on one stage and performed musical gems from the Baroque repertoire such as by Bach, Händel and Telemann, as well as compositions by the world-famous Estonian composer Arvo Pärt, who was also present at the concert, receiving warm ovation after his pieces were played.

Founded in 1991, Concerto Copenhagen today takes on the position as Denmark’s National Baroque Orchestra and is one of the most innovative period instruments orchestras worldwide. Signature features of Concerto Copenhagen are its unusual program combinations of rarely performed Scandinavian repertoire and known masterpieces from the Baroque and Classical eras.

The Estonian Philharmonic Chamber Choir (EPCC) is one of the best-known Estonian music ensembles in the world. The EPCC was founded in 1981 by Tõnu Kaljuste. The repertoire of the choir extends from Gregorian chant and baroque to the music of the 21st century, with a special focus on the work of Estonian composers introducing their output to the world. Each season the choir gives about 60–70 concerts both in Estonia and abroad.

Click here to watch the full concert and re-live the vivid emotions!

The Dannebrog 800/ Estonia 100 celebration reminded us that Denmark and Estonia have a long tradition of cooperation and mutual understanding, common values and goals. The Danish Cultural Institute has been extremely happy to be part of this historical and remarkable happening in 2019!