Awakening of Nations – A Danish Golden Age of Painting 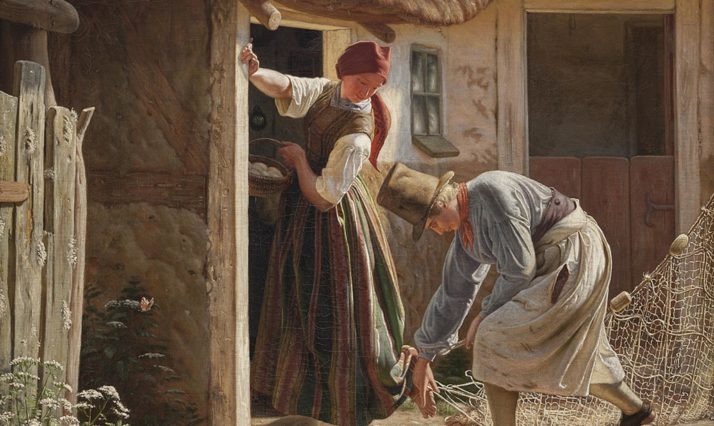 The new exhibition “The Awakening of Nations” will bring more than 40 Danish Golden Age masterpieces to Vytautas Kasiulis Art Museum in Vilnius to celebrate 100 years of official diplomatic relations between Denmark and Lithuania. The exhibition is organized by the Lithuanian National Museum of Art, the National Gallery of Denmark, the Danish Cultural Institute in Estonia, Latvia, and Lithuania, and the Embassy of Denmark in Lithuania.

The exhibition “The Awakening of Nations” will be opened by H.R.H. Crown Princess Mary of Denmark and First Lady Ms. Diana Nausėdienė on the 30th of September.

The exhibition is open from 30th of September to 7th of November 2021 at Vytautas Kasiulis Museum of Art with a possibility of a sneak preview from 23rd of September.

Art has a close and complicated relationship with national identity and feeling. Stories, rituals, symbols but especially also art can play an important part in the establishment of a shared historical and visual memory. In Denmark, it is often artistic works from the 1800s that are used to strengthen national cohesion and a sense of belonging. The fairy tales by Hans Christian Andersen, the national anthem by Adam Oehlenschläger and N.F.S. Grundtvig’s hymns are often attributed a special national meaning and power, and the same can be said of the Golden Age painters who have been reproduced in many different contexts and who have been crucial for shaping the Danish collective memory. In a Lithuanian context, the question of national belonging and the uncovering of a national character takes up a lot of space in the cultural discussion where the long lines back to Lithuania’s former periods of independence are explored. There exists a strong curiosity regarding the connection between art, culture and national cohesion and feeling.

This need for and interest in physical artistic manifestations that points to a shared history or memory have to be understood in the context of the political and cultural history of Lithuania and several of the states that were occupied by the Soviet Union during the 20th century. Lithuania is, compared to Denmark, a country without a long continual national history. The nation restored its independence 100 years ago in 1918 after having been controlled by foreign powers for a long time. Lithuania became occupied again by the Soviet Union in 1940, then by Nazi Germany in 1941 and then once again by the Soviet Union in 1944 until 1990. This historical context is crucial to understanding the Lithuanian national art and the Lithuanians’ relationship to their national identity. This relationship has been explored by the Danish ethnologist and traveller Åge Meyer Benedictsen who first came to Lithuania in the early 1890s at a time when the country as such did not exist. However, Benedictsen described Lithuania’s history, mythology, customs, language and political situation in a book which remains one of the most exhaustive accounts about Lithuanians as an ethnic group, fittingly named Lithuania, the Awakening of a Nation in English. Benedictsen’s goal was to create awareness and understanding in Denmark for the Lithuanian national awakening which he saw taking shape at the time, and it is clear that he considered culture to play a key role in this awakening and in the formation of a nation.

It is very tempting to draw a parallel between this Lithuanian history and the very unstable situation characterising Denmark in 1800s and which the Danish Golden Age of Painting was born out of. It was in the wake of a series of large national crises such as the defeat to the English in 1801-7, state bankruptcy in 1813 and the defeat to the Prussians in 1864 that the Golden Age paintings, which today are seen as key to ideas of ‘Danishness’ and Danish cohesion, were created. However, if the flowering of art and painting, Denmark experienced in this time period, can be understood as a reaction to a need that emerged when the country became geographically, financially and politically smaller, then Lithuania instead experienced losing its sovereignty completely, and the strong Soviet censorship during the occupation in the 20th century limited the artistic and cultural life in the country to a very large degree (Benedictsen’s book could, for example, only be published in Lithuanian in 1997 after the collapse of the Soviet Union). After a comparatively short artistic blossoming in connection with the independence at the beginning of the 20th century, where the Lithuanian art to a large degree was engaged in establishing a coherent picture of a Lithuanian nation with one history, it was therefore first at the end of the 1980s that it became possible to break free of the rigid soviet restrictions. Here, new art groups, initiatives and experiments could grow side by side with a new national re-awakening.

The differences between the development of Denmark in the 1800s and of Lithuania in the 1900s are large, but both countries saw national crises awaken something in art – or, maybe more precisely, they saw art playing a crucial part in the creation and construction of some of the building blocks (a unique common memory or understanding of history) necessary for a national feeling that can be more or less important at different times in history. This is also why the Awakening of Nations exhibition seems remarkably relevant in 2021 which marks the 100- and 30-year jubilees for Lithuanian independence – and while there might be very little doubt as to Denmark’s and Lithuania’s continued existence as sovereign nations, the topic seems nonetheless as urgent as ever in an ever more global world where new migration patterns, virtual technologies and global crises such as climate change and the COVID-19 pandemic also works to put national identity and cohesion under pressure. This opens up for opportunities to reimagine what it means to be Lithuanian or Danish as well as how we should view our relationship to the world we inhabit and the people we share it with – a reimagining that both could and should build on and take place in art.

“For both Denmark and Lithuania, it is essential to discuss and discover how art and culture in general reflect and has formed and still forms our history. Danish Golden Age is an artistically strong and fascinating example of this.”

Simon Drewsen Holmberg, Director of the Danish Cultural Institute in Lithuania, Latvia and Estonia.
BACK TO LATEST NEWS